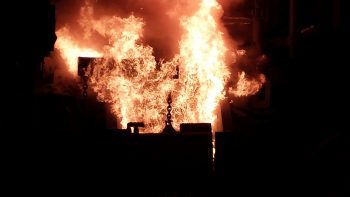 The criteria for removing alloy chain from service includes excessive wear, elongation, nicks and gouges, and bent links but one additional consideration is exposure to excessive heat. Manufacturers’ recommendations are to remove alloy chain from service due to excessive high heat exposure. A major indicator of this exposure is a visible discoloring of the steel to a variety of blue hues progressing eventually to a grey or dark grey color. Once the alloy chain has transformed into these stages, removal may be necessary based on the application.

OSHA, ASME, NACM, and manufacturers’ recommendations are all in agreement that alloy chain is required to be removed from service once the chain has been exposed to temperatures in excess of 1000° F. There is further agreement, in a published chain heat exposure chart, which shows that alloy chain must be used at a reduced working load limit while at temperatures between 400° and 1000° F. There is also a permanent reduction in capacity which must be applied to the chain for the remainder of the service life of the chain based on the exposure temperature.

The technical explanation is the fact that alloy chain will begin bluing at varying shades between 560° and 790° F. The bluing is an indication that the chain has seen excessive heat but maybe not have exceeded the 1000° F removal threshold. If the chain is being used in what we would consider “normal use” at ambient temperatures and the chain is blue, the chain was overheated in excess but no reduction in capacity has taken place. This is why the chain must be removed from service. Usually, when chain is being used in an environment where the potential for excessive heat exposure is imminent, consideration is given to those chains and they become dedicated to a given application with the high heat reduction applied.

One interesting side note is how this possibly came to be is a phenomenon called “Blue Brittleness” which occurred during WWII. When the large anti-aircraft guns were firing shells at planes, the ends of the gun would get very hot to the point they would turn blue after shooting off several rounds continuously. The gun barrels all then began to crack from the excessive exposed heat. The US Navy had to develop a new tempering procedure for the gun barrel manufacturing process. The “recipe” was finally developed so they were able to change out the barrels with the new design which solved the problem and the US won the war. There is correlation between this incident and the use of alloy chain being used at or beyond its tempering temperature.

Are BTH Devices Required To Be Proof Tested?

Contributed by Bob Kozickie, Technical Sales Support Manager Edited by Christy Kutchma, Product & Marketing Associate Are Below the Hook lifting devices are required, by law, to be proof tested prior to initial use? There has been a long standing ongoing debate within the lifting and rigging industry as to the proof load test requirements of BTH liftin...