How to Read and Understand an Alloy Chain Sling Capacity Chart

Alloy Chain Sling Capacity Charts are published by Standards Associations, chain manufacturers, and virtually every rigging shop in existence. They are reproduced and can be printed as large or small wall posters or as pocket guides that riggers carry with them for quick reference.  At first glance these charts appear to be simple easy-to-read and follow guidelines for the maximum lifting capacity or working load limit (WLL) that a given alloy chain sling may have at a specific lifting angle. There are circumstances which require that multiple chain slings be used to lift a single load. This would lead one to ask, do you just add the capacities on the ID Tag to attain the slings safe WLL? The ability to understand an alloy chain sling capacity chart is knowledge that is a valuable asset to any competent rigger.

The easiest column to read and understand is the Single Leg chain sling. This is very straight forward since all single leg slings can only be rigged in a vertical hitch configuration. This would then be required to be rated at a ninety degree angle the load. It also has the same working load limit (WLL) as the corresponding alloy chain grade and attachments used to assemble the sling. The WLL circumstances will change if two single leg chain slings are used in a single two point lift. We will address what happens to the capacity when multiple single leg slings are used together.

The next reference column on the chart is often referred to as Double Leg chain slings. It’s when two legs are attached to a single master link or two single leg chain slings are used together to lift one load. This configuration is rated at a maximum sling angle of 60 degrees. 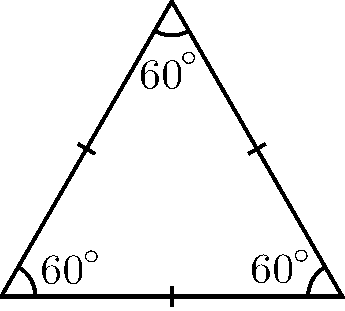 The reasoning is based on the geometrical spread of the lift points on the load from the single point master link at the top. Sixty degrees is the optimum angle to attain when rigging a load with two pick points. The chains will actually form an equilateral triangle with each point having a 60 degree angle. The angle of multi-leg slings will be sixty degrees provided the distance between the lifting points are equal to the slings’ Reach stamped on the I.D. Capacity Tag. As the distance between the rigging sling connection points increases, the overall lifting capacity is reduced based upon the rigging angle to the load.

Let’s take a look at an example by choosing one of the most common sizes of alloy chain used in rigging.  1/2” Grade 100 alloy chain is rated at 15,000 lbs. and it is also the rating of a Sling Leg chain sling.  If the rigger only has two Single Leg chain slings available to rig the load, the Double Leg capacity column must be followed. The reasoning is that the two pick points are some distance apart from each other and not attached to the load at one single point. There will be an angle of lift that is less than 90 degrees. So, if the rigger simply tries to double the capacity of each Sling Leg sling to 30,000 Lbs. he will be exceeding the 60 degree angle rating of 26,000 Lbs. by 4,000 lbs. or 2 tons. That is provided the angle of lift is between 60 and 90 degrees. That amount is significant but what happens if two Double Leg chain slings are used to lift a load having four lift points. 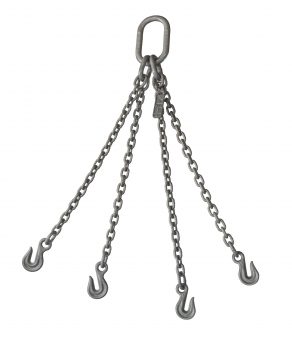 Understanding the alloy chain sling capacity chart is critical when using triple and quad chain slings. The rigger must be aware of the rating based on the number of legs and the angle to the load. It must be noted that both three and four leg alloy chain slings are rated at the same capacity. Chain is a rigid material that has no elasticity. Extensive testing has been done to verify that only three legs, configured into a four point lift, are supporting the load at any given time when using alloy chain. One leg will always be a balancing leg. That leg will randomly rotate amongst all four legs as the load shifts when lifted and transported.

The previous scenario of using two Single Leg chain sings in a single lift becomes more serious when two 2-leg chain slings are used in conjunction to lift a single load with a four point pick. Using the same 1/2” Grade 100 alloy chain in a Double Leg configuration with a capacity of 26, 000 Lbs. at 60 degrees, conventional thinking is to double the capacity to 52,000 Lbs. The true capacity would actually be 39,000 Lbs. due to the one leg always being a balancing leg. This is where critical overloading most often occurs by exceeding the WLL by 13,000 Lbs. or 6-1/2 Tons. A slight shift or shock load is more likely to lead to a catastrophic chain sling failure when that large of a capacity differential is experienced.

Understanding the angle of lift on multi-leg chain slings is also a critical part of safe rigging practices. As stated earlier, when the distance between the lifting points is equal to the reach on the ID Tag, the angle of lift will be 60 degrees. As the distance between the lifting points increases, the capacity of the sling will decrease as the angle gets closer to the minimum allowable angle of 30 degrees. The oldest and best analogy that explains how the capacity decreases is the Water Bucket Example. The way it works is that you have two full buckets of water on each side that are sitting on the ground close to your feet. You lift the buckets up and can hold them stationary for a long time before you have to sit them back on the ground. Now, move those water buckets out a foot away from your body and repeat the lifting process vertically while maintaining the same angle that your arms were at when you reached out to pick up the buckets When this happens, the strain on your arms starts to become intense after a brief time and you need to set the buckets down on the ground. Finally, move the buckets out another foot and repeat the lifting process again. This time you can only hold the buckets for very short time before you have to set them back down. This is the same stresses and strain that the lifting system feels when it’s under those same angles while lifting a load.

Alloy Chain Sling Capacity Charts are established based off engineering calculations that are substantiated by extensive testing. These charts may appear to be very straight forward and uncomplicated to read and apply. The incompetent rigger through no fault of their own, however, often does not know the complexities involved when hitching a chain sling to a load. Training and understanding are key elements to maintaining a safe work environment. Peerless can provide extensive, in-depth training, on a variety of topics related to the application and inspection of alloy chain slings. Contact a Peerless distributor for more information.

Contributed by Bob Kozickie, Technical Sales Support Manager Edited by Christy Kutchma, Marketing Coordinator The single most important component on an alloy chain sling is the identification tag.  Per OSHA 1910.184, if the ID tag is missing or illegible, the sling must be removed from service. OSHA is diligent in enforcing this regulation.  Not only is having the ID t...